I get asked about inversion tables at least a few times a month. Here’s my take on it… 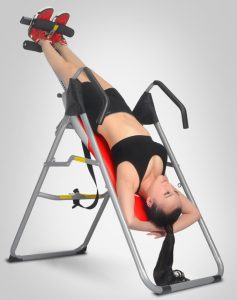 For those of you who don’t know what inversion tables are, it’s basically a table where you hang upside down by your feet or ankles in an attempt to decompress the spine. Some people even use it to improve circulation by draining the blood in the legs.

If you do some research on astronauts that fly into outer space and the effect that it has on their spine, you’ll find that problems arise in the spine for many of these astronauts. That’s because the spine is designed to withstand the downward forces of gravity, which doesn’t exist in outer space. The human spine should have 4 distinct curves on the side view, as seen in the below picture. One of the reasons these curves exist is to basically cushion the spine, sort of like a spring. As gravity is removed when a person goes into outer space, the spine straightens out, the discs sometimes swell, and the muscles around the spine weaken. *As a side not, NASA uses infrared thermography to assess the spinal effects and nervous system function on their astronauts, which is also the same technology we use at Keystone Chiropractic. 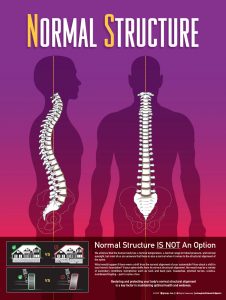 Now let’s switch gears and talk about inversion tables. When we hang upside down by our ankles, we aren’t just removing gravity but we are using gravity to pull our spine apart. Didn’t we just discuss how removing gravity harms the spine? Just imagine what kind of damage can be done when we now use gravity to pull on the spine. If you have a herniated disc, a bulging disc, or some other form of disc injury, short term use of the inversion table to decompress the disc does have some therapeutic benefits. But keep in mind that the spine is designed to withstand gravity, not be pulled apart by it. When gravity is pulling on the spine, the ligaments and surrounding structures that are supporting the spine is also getting pulled and stretched which causes further instability. If you ever sprained an ankle, you’ll know exactly what I mean. When you think of an ankle sprain, the foot often rolls inward (while the ankle rolls outward) which stretches all the ligaments on the outside part of the ankle. Because ligaments don’t heal well, the ankle will no longer have the same structural stability that it once had before the injury. The same thing happens in the spine. As we stretch and pull the spine apart, the ligaments supporting the spine are also being stretched and pulled beyond something that they are designed to do. As this happens, the spine becomes unstable which can lead to further damage in the long term. Additionally, an inversion table works by hanging upside down by your feet or ankles. I will add here that the feet, ankles, knees, and hips were never designed to be pulled apart from one another, so damage can occur in those areas of the body as well.

If you noticed in the first paragraph, I said that the human spine should have 4 distinct curves on the side view. The reason why I said “should have” is because these curves are often lost due to a neuro-structural shift in the spine. When the spine shifts out of alignment, the rest of the spine and body will compensate for the structural instability, and the curves may diminish or even completely reverse. Because the curves in the spine make it strong, the loss of these curves weakens the spine and creates instability. If the neuro-structural shift remains uncorrected over a period of time, this is when arthritis, degenerative disc disease, degenerative joint disease, facet arthrosis, and other conditions develop in the spine. The simplest way for me to explain this would be that the spine becomes unstable, and the body tries to stabilize it by creating arthritis and fusing the bones and joints together. As the spine becomes unstable due to weakening of the ligaments and other supporting structures in the spine, the same degenerative changes may occur because the body is trying to stabilize the weak areas.

Granted, using the inversion table for a short period of time will not be a huge factor. In fact, they may be beneficial for disc herniations and other disc injuries because of the decompressive effects. However, the repetitive use of the inversion table creates a cumulative effect of damage that can occur. Similar to how one minor ankle sprain may not be significant, but repetitive minor sprains over a period of time will definitely cause damage and instability. So what’s a good alternative? For decompression, simply lying down will do the trick. The natural way for the body to decompress is lying down and dispersing the downward forces of gravity. If you want to increase circulation in your legs, all you need to do is elevate the feet and legs slightly above heart level. By doing so, gravity will assist in draining blood from the legs and back to the heart. 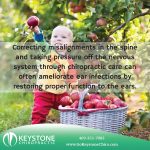 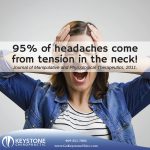